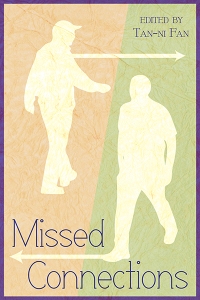 A fleeting glance across a crowded space. Trains passing by in the night. Paths that once split unexpectedly cross again. Old friends reunited. Sometimes rediscovering a person and having new feelings can be just as intense as an initial spark. Less Than Three Press presents an anthology of stories about people who get a second chance to connect…

Marooned by Diana Sheridan
In Deepest Waters by Angel Propps
Fumbling Toward Crescendo by Jamie Sullivan
Past Due Diligence by Elena Alexandrescu
Savior by Mina MacLeod
Captive Heart by Cassandra Pierce
First Guy Kiss by Cecil Wilde
Evergreen by Cari Z.
Love Among the Pines by Caitlin Ricci
Beware of Doors by Sara Fox
Don’t Talk to Strangers by C.J. Munoz
Lessons on Giving by Valerie Mores
Rab+Rob 4ever by Lucy Kemnitzer

Read an excerpt of Evergreen, by Cari Z:

The International Space Agency (ISA) welcomes you to your new position as a candidate for Project Evergreen, the next stage in humanity’s cooperative exploration of our closest planetary neighbor, Mars. Congratulations on everything you have accomplished in order to make it to our advanced training program. Now that you’re an official candidate, we recommend you assess your commitment to the end goal of Project Evergreen, which is permanent residency for all crew members at Martian Base One (MB1). If this is incompatible with your goals in life, please remove yourself from the candidate pool before we continue to invest in your training. We want only the most motivated candidates available. Remember, for every one of you who reaches this stage of training, ten thousand others are vying for your place. –ISA Project Evergreen Handbook

Cyril’s first week in the space program wasn’t at all what he’d expected.

He had anticipated plenty of tests, naturally; the governments and corporate sponsors in charge of the program only accepted the best of the best, and that meant you didn’t stand a chance of getting in unless you knew your specialty inside and out. Competition in the private sector was stiff, but competition within the military was insane, which was why Cyril was glad he’d spent the past three years not just boning up on aerospace propulsion engineering, but going all out on his fitness as well. All those agonizing 5:00 a.m. runs felt a lot more gratifying now that he was the only person still standing after the two-mile sprint.

“You call that running?” Sergeant Malloy shouted from her place on the side of the track as she watched the last of the brand-new military recruits stagger toward the finish line. “I’ve seen better times out of eight-year-olds! You are supposed to be the best, the brightest, the most motherfucking capable that six different nations have to offer! And this is what you give me? China, nine minutes? Really?” She stood over one of the gasping men and glowered at him. “What’s your name, soldier?”

“At least you can get it out without vomiting, unlike Captain America over here.” She gestured to the American soldier who was bent over retching in the aftermath of his run. “Or maybe that’s just because it took you nine fucking minutes to run two miles! Honest to god, I am embarrassed for your home countries, soldiers.

“And here comes Australia and India, joining the class at last,” the sergeant yelled sarcastically as they stumbled in. “Ten goddamn minutes, which is two minutes too long as far as I’m concerned. No, don’t lie down!” she added as both the soldiers dropped to the ground. “You don’t get to lie down and take a break for getting the worst times in the group! Did you think I’d go easy on you because you’re a woman, Flight-Lieutenant Brown? Both of you, take another lap.”

The sergeant cast her eyes to the sky. “This is what we’re manning missions to Mars with now? Sad. Just sad. You all better make the most of your ability to suck wind while you can, because breathable air’s gonna be in short supply once you get to MB1. You’ll have to work, you’ll have to think, you’ll have to fucking live with the constant threat of running low on oxygen, so I want you to remember that when you’re cursing me for being a hard-ass about this. You’re soldiers, not civilian scientists. You don’t get to play by their rules. If there’s a sacrifice to be made, you’ll be the ones at the front of the line, which means you have to be ready! You have to be better! You have to be the best!” Sergeant Malloy crossed her arms. “And as of right now I see only one person who I would even marginally qualify as acceptable. Russia! Come here!”

“Yes, ma’am.” Cyril stepped forward, very aware of his fellow recruits’ attention. He squared his shoulders and looked straight at the sergeant. He didn’t care what they thought of him. They could hate him, he could handle that. He was never going to do less than his best for anything.

“Well, whatever that stick up your ass is made of, boy, don’t pull it out just yet. It might be all that’s holding you up.”

Stick… what? Cyril had split his time evenly between the US and Russia as a child, but he hadn’t heard that particular expression before. It had to be old. He heard the man referred to as ‘Captain America’ snicker, and forced himself not to react. “Ma’am,” Cyril said evenly.

“Exactly.” Sergeant Malloy cast her gaze at the two stragglers who were just now finishing their extra lap. “I think it’s time for a nice, long hike. Get your packs out of the shuttle and meet me at the foot of Flagstaff Mountain in five.” She waited for a second for it to sink in, then yelled, “Now, soldiers!”

The ones on the ground hauled themselves, groaning, to their feet, except for the American, who looked over at Cyril and held up a hand. “Help a mate out?” American, with a British accent. It shouldn’t have been surprising, everyone here had multiple nationalities—it was one of the major requirements for every member of the fourth mission to Mars—but for some reason that accent made Cyril start. He stared blankly at the man.

“I know I’m pretty, but there’s no need to stare, now,” he said cheekily. “You’ll get plenty of chances to ogle me later, luv. Gimme a hand before our little reprieve is up?”